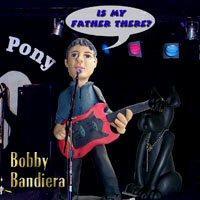 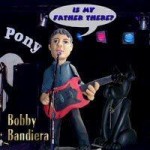 Is My Father There? is Bobby Bandiera’s third official release if you don’t count the Shove It Down Your Throat compilation of his first two CDs, Bandiera and Dog Loves You. The previous two record release parties took place at Cheers, in Long Branch but of course that bar has now been closed, so I guess that was no longer an option as far as choice of venue was concerned.

Although this show was advertised as the official record release party, Is My Father There? had already been on sale at Bobby’s recent shows as well as from Jack’s in Red Bank.

Not surprisingly, I had my copy before I left for New Jersey and, having had a chance to listen to it a few times, I had come to the conclusion that I was listening to a musical snap-shot – if you will – of a fairly typical Bobby Bandiera Band gig, I was nevertheless looking forward to hearing how Bobby would put this particular show together. As you can see from the cast of thousands who supported Bobby here, it was clear from the start that this was going to be different.

Not only were the songs from the CD performed in the exact order they appear, but they also featured the exact musicians who recorded them, with two notable exceptions. Bobby played most of the bass lines on the studio version of the songs but faced with the obvious logistics, those duties were ably performed by Jukes’ bassist, Steve “Muddy” Shews, who also contributed to the recording of the CD.

The other exception featured Young At Heart. Tim McLoone, founder and leader of Holiday Express of which Bobby is a member, plays piano on the studio version but presumably for scheduling reasons, Tim’s part was played by Kevin Kavanaugh at the record release party.

So, was it alright on the night I hear you ask?

And here’s a break down of Is My Father There? as performed live from the summer stage at the Stone Pony, Asbury Park, N.J., July 4th, 2004.

Don’t Stop – this is the first of four original songs that feature on the CD. Beatles influences are apparent but its all the really great guitar sounds that are soooooooo obviously Bandiera that make this song a hit with me, yeah… loved it!

Over, Under (Sideways, Down) – this was a huge hit for the Yardbirds and was played to perfection. According to Bobby, the material he has chosen to cover on this CD are songs he has always wanted to record.

Rock ‘n’ Roll City – this is a stormin’ Norman Nardini song and it was a tremendous surprise and treat to see Norman doing a battle of the Fenders with Bobby on this brilliant dare-you-to-sit-still track.

(I’ll Never Find) Another You – this was the poignant closing song at the Hope Benefit concert which took place in April 2003 to help raise funds for the medical care needed for Bobby’s son, Robert. It’s hard to find words to describe the heartfelt sincerity with which Bobby sings this song. Suffice to say it is very moving, was a highlight of the show and is ultimately a priceless legacy for Robert.

Love (Messin’ With My Mind) – this is the second original song that is featured on the CD. It’s kinda bluesy and something you might hear from Eric Clapton. Great guitar sounds together with the added depth from the tenor and baritone saxophone solos make this another favourite of mine.

Don’t Bring Me Down – this song was written by Johnnie Dee and originally performed by the Pretty Things; it also appears on David Bowie’s Pin Ups album.
It’s one of these songs that’s got a stop-start feel to it but as you’d expect, Bobby has added his own great guitar touches to this song and to my ears, it sounds better than the original version.

Claudine – this is the third new song from Bobby and also featured at the Hope Benefit concert. It’s as straight-ahead a rocker as you’ll get and has all the ingredients that you’ll find on some of Bobby’s other great songs such as, Pauline and Rescue Me. Great song for filling the dance-floor and some superb guitar work from Bobby.

Young At Heart – this is not the version made popular by the Scottish band, the Bluebells. No, this version was released a lot earlier than that and takes Bobby’s vocal skills to a completely different level. Gone is the rock ‘n’ roll image and in its place is a cabaret artist of the highest caliber, accompanied by nothing more than a piano. Dedicated to the memory of a close friend, Bobby performed this song superbly.

Here Comes The Sun– the first time I heard Bobby singing this song was at Bruce Springsteen’s Holiday Shows in 2001 as part of a tribute to George Harrison. It blew me away then and it still blows me away now. There is simply nothing I can say that will describe how incomparable Bobby’s version of this song is.

If You Got Trouble – apparently this was the first ever song written by Richard Starkey. In accordance with the studio version, Ryan Celestino took over the drums for this one adding yet another dimension to the wall of sound Bobby’s band had created thus far. Great version of a relatively unknown Beatles’ song.

Mr. Robert – I’m not sure how Bobby would define this self-penned song but to my ears it’s a sort of soft-shoe-shuffle type instrumental with a few Sgt. Pepper-esque words added here and there. Strangely enough, it was the only song on the CD that was not performed at the record release party. Instead, Bobby launched into C’mon Caroline and right on cue, Southside Johnny, Mark Pender and Richie “LaBamba” Rosenberg, joined him on stage for this rousing finale to what was a truly outstanding performance.

“You’re fired,” yelled Johnny as Bobby vacated the center-stage slot… which I think is about as high a compliment as anyone could ask for!

This show had everything under the sun… electric guitars, acoustic guitars, piano, organ, horns, outstanding vocals but most of all, a stage full of accomplished musicians, each of whom is so very talented in his own right but who nevertheless came out and supported Bobby for this very special occasion.

Is My Father There?  Good question!  But I certainly was and it was a really, great show.