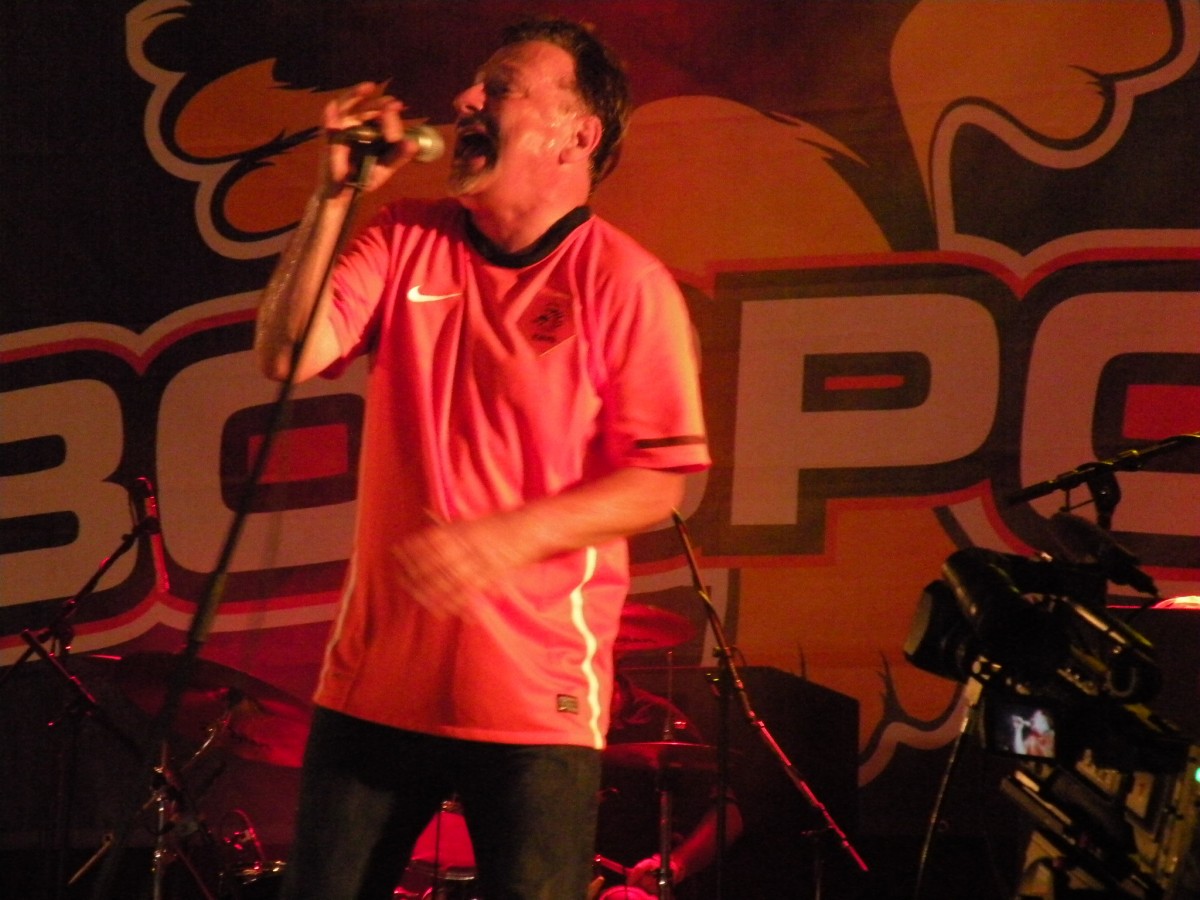 BOSPOP FESTIVAL – Weert, The Netherlands, 10 and 11 July 2010 – 2 days of baking temperatures, fabulous music, a spectacular thunderstorm and an appearance by… Southside Johnny and The Asbury Jukes.

If you’ve never come across “Bospop” before, don’t worry… neither had I until I heard that Southside Johnny and The Asbury Jukes were scheduled to make an appearance at this year’s 30th Anniversary bash. Back in 1980, Bospop began its life as a platform for showcasing local talent. However, since then it has steadily grown in popularity becoming one of the Netherlands’ biggest outdoor happenings, forcing a move to a new, larger site this year.

In the past, Bospop has attracted internationally acclaimed mega-acts like Deep Purple, Neil Young and Motorhead for example, and in keeping with this tradition, the headliners for Bospop 2010 were John Fogerty and a reformed version of Toto, respectively. OK, so that was the paper version… in reality, a quick schedule change was necessary in order to show the Dutch National Football Team’s World Cup Final game against Spain. So yes, as per the sea of orange that was spellbound by the football action on the big screens, I guess you could say that this event became Sunday’s headliner, or, at least it would have been if “Hup Holland Hup” had actually won the game…

Anyway, as mentioned above, the heat was very definitely *on* for Bospop 2010 and I believe the temperature reached a staggering 40°C during the course of the Saturday shows. There were two stages at Bospop – the outdoor main stage and the “tent stage” – The Jukes were scheduled to perform on the “tent stage”… uh-huh… conjure up a very large, very pink, pvc circus-type gazebo with sides open in the (forlorn) hope of allowing some air to circulate, a make-shift wooden floor, a centralized mixing desk, a bar and of course some die-hard Jukes’ fans. In other words, the perfect components for a Jukes’ show!

Featuring an impressive performance from new Jukes’ drummer, Tom Seguso, the band’s welcome-on-stage music came courtesy of the Rolling Stones (Get Off My Cloud). This was quickly drowned out by Key to the Highway which seemed to be an extended sound check rather than the opening song but which nevertheless signalled the entrance of the press photographers.

Johnny entered into the Dutch World Cup Final spirit by wearing a seriously orange football shirt. It might even have been one of these all-singing/all-dancing breathable fabric numbers but if it was, it failed the sweat test miserably within a couple of minutes! This Time It’s For Real kicked-off the official start of the show and rest of the set went as follows:

Cross That Line and Woke Up This Morning from the new album went down well with the crowd, then came This Time Baby’s Gone For Good followed by Shake ‘em Down which brought forth outstanding solos from Eddie Manion.

At this point, Johnny paused for some much needed air, attempted a couple of “Viva Espana” type jokes and then as the horn section came marching out front, lead by trombonist extraordinaire, Neil Pawley, the set continued with what looked and sounded like a New Orleans street party as Gin Soaked Boy continued to rock the joint.

Oh yes, the joint sure was rockin’! I looked round to see why the floor boards under my feet were bouncing and basically, the tent was packed out with people diggin’ the show – as one would expect, of course.

Steve Van Zandt’s Forever was next. Not only did it feature another superb solo by Eddie Manion but it was also a very special request from long-time Jukes’ fan and asburyjukes.net administrator, Klaus, who chose this song to set the scene for a marriage proposal to his girlfriend, Gundula. And where was Gundula when all this was going on? Down at the front of the stage taking photographs of her favourite band, unsurprisingly! An undaunted Klaus managed to recreate the “lost moment” a little later and I’m very happy to tell you that a delighted and surprised Gundula said, “YES!” Congratulations and the very best of everything for the future to two of my favourite people.

Introduced by Johnny as, “A Steve Van Zandt song…” and then, changing his mind, “A Jeff Kazee song…”, Lost turned the focus of attention on Jeff’s singing prowess. Regardless of the technical blips that were going on with his Hammond, Jeff’s performance was wonderful as was Glenn Alexander’s guitar solo in this fabulous song.

The tempo picked up swiftly again as John Conte’s bass lines opened I Played The Fool and which featured yet another stonking solo spot from Eddie Manion who was doubling-up as tenor and baritone sax soloist in Joey Stann’s absence.

The Jukes’ version of Alejandro Escovedo’s Tired Skin is one of my favourites and I’m sure I was holding my breath unconsciously in anticipation of Chris’ sensational trumpet solo which I knew would surely come. Let’s just say I wasn’t disappointed and as the piano and trumpet duet brought this song to a close, the audience’s appreciation was deafening.

A quick plug for the new album, Pills And Ammo, preceded Harder Than It Looks which was followed by The Fever, always a hit in a Jukes’ set for me; Chris’ inspired solo almost blew the rain covers off the top of the tent!

And then, the oh-so-familiar top notes from Glenn Alexander’s Fender launched I Don’t Wanna Go Home… and we didn’t. We stayed put and as we reached up and touched the sky, it was sadly apparent that this superb, short, sharp, blast of The Jukes was coming to an end.

“We’re The Jukes from New Jersey”, announced Johnny as the band left the stage ever so briefly, dashing back to play a sensational encore of One More Night To Rock.

Now, if anyone has been counting, you will see that we were treated to 15 songs in a very tightly time-controlled set which “I” think was pretty good goin’! And yes, in hindsight, it was a little bit like watching a 4th July fireworks display in terms of duration but nevertheless, the 60 minutes that The Jukes performed were jam-packed with classics and new material alike.

It was really great to see the band play again… and it’s always hard to separate one highlight from another… this is what makes The Jukes, “THE JUKES”… or, as someone who posted a video clip from Bospop 2010 on You Tube said of them: One of the coolest and most underrated bands of music’s long history.

Thank you so much for sending the guys to Bospop 2010, Bill, here’s hoping the band picked up some new fans as a result of this appearance and fingers crossed they come back again for Bospop 2011.

Btw, the spectacular thunderstorm actually came after the Jukes had left the festival site leaving John Fogerty to deal with the question: Who’ll Stop The Rain?!?!