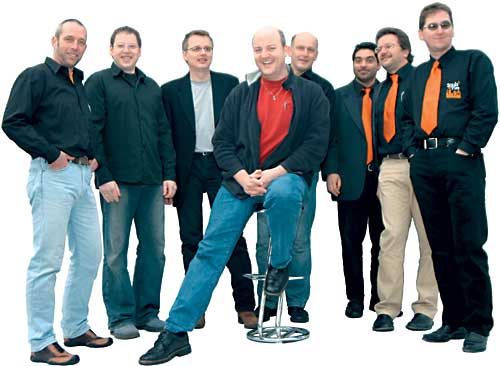 Prior to the Sunday night acoustic show, the very first Jukes’ Fan Convention to be held in Europe took place at the Unikellar bar, an integrated hostelry part of the Osnabrück University. Apparently the seed for this event was sown at the Ancienne Belgique, Brussels, when the Jukes performed there a couple of years ago. Something to do with a bunch of fans getting together before the show and having the surprise of their lives when the guys in the band came down to the bar to say “hi”, I believe! OK, so I knew the bit about the guys in the band stopping by, but hey… there was no way I was going to lift the lid on this!

Another contributing factor to this event was the fact that it had been 25 years since the Jukes first appeared on the German TV programme, Rockpalast. At that time, the programme’s host was Peter Rüchel and it was particularly fitting that Peter agreed to come to the Convention and ultimately make a presentation to Southside Johnny to commemorate the band’s first German television broadcast.

And so, thanks to Gisela, Klaus and Guido, we had ourselves a helluva party!

Now, there are “cover” bands and there are “tribute” bands and “Souls On Fire” very definitely fall into the latter category. Their set included a mixture of old and new Jukes’ songs and they certainly raised a few eye-brows – à la Roger Moore – when some of the older material like “Why” was performed.

It was just great to see Jukes’ baritone sax player, EddieManion, get up and jam with the guys and if smiles could have generated electricity, the Unikeller would have had been lit up for a week.

And as if that wasn’t enough… in walked the rest of the Jukes to a rapturous welcome.

After the above-mentioned presentations had been made by Peter Rüchel and Johnny had made his reply, “Souls On Fire” picked up where they had left off and continued playing until it was time to go home – not than anyone wanted to go, but the thought of the acoustic show was kinda alluring. “Souls On Fire” really did credit to the songs they played and their performance had the Unikellar rockin’.

Check out: http://www.souls-on-fire.de/index.htm for everything you’d like to know about the Best Jukes’ Tribute Band In The World and incidentally, “Souls On Fire” are also the current “Fans of the Month” on the official Southside Johnny website. Congratulations, thanks for a great time and, way to go guys!

Congratulations also to Klaus and Guido for putting the whole she-bang together and as for their incredibly clever t-shirt that said: “I Always Wanted To Be An Asbury Juke” – a quote from Jon Bon Jovi, it won’t surprise you to know that they were the most popular shirts of the day!

This set the scene perfectly for the acoustic show that would follow.