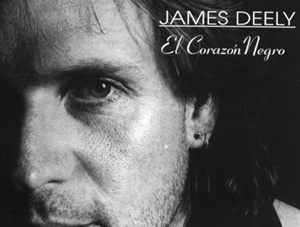 Back in ’88, Backstreets magazine ran a feature which named eight New Jersey bands who were tipped to be rising stars of the 1988 shore music scene.  One of these bands was James Deely and The Valiants.  They played a unique blend of big beat Jersey rock from R&B to CCR and from Elvis to Bruce.  One of their regular playing haunts was the legendary Stone Pony in Asbury Park and as well as travelling all over New Jersey, they took their sounds to other places such as Washington D.C., Philadelphia and of course, New York City.

It was only recently that I found out about James Deely and his new CD release entitled El Corazon Negro, thanks mainly to some information which appeared on the internet from George Beckett, who owns Cheers in Long Branch, NJ.  Figuring that if James was known at Cheers, then this CD had to be worth a listen!

I managed to obtain a copy, put it on with a certain amount of trepidation and at the end of the first upbeat track which is called Travel Light, my extrasensory Springsteen radar system had been activated!  Had I just heard some borrowed lines from Born To Run??   A quick re-play confirmed that my ears had not deceived me and from there on in, the remaining 11 tracks present a mixture of several different styles of music.  These range from the straightahead rock of  Custom Made to the Nashville-sounding Dirty Work.  There’s even a rock-a-billy Elvis tribute called Running Back ’56 which will have you tappin’ your blue suede shoes!  Other influences that come to mind include John Fogerty and perhaps some of the more mature of us may even recognise a very definite Duane Eddy-style guitar twang here and there.

What follows, is some information about James Deely’s background which I hope will help to shed some light on this talented musician, who grew up amidst the rich musical history of the Jersey Shore.

Although he was born in Washington D.C., when James was in his late teens he moved to Los Angeles to study music.  He had a stint of playing on the L.A. club circuit with a band called “The Palisades” and when they disbanded, James headed back to New Jersey.  This move brought about the inception of the very popular shore band The Valiants with a line up of Ron Haney on guitar, Paul Ford on bass and Pete Barnett on drums.  Later on, the drumming seat was occupied by Lance Hyland Stark.

James Deely and The Valiants independently released 3 albums while they were a mainstay of the highly active Jersey Shore music scene and they were frequently heard over the airwaves.  They even won a contest which was sponsored by a radio station in Trenton for being the “Best Unsigned Band”.

James was really floored by what Bruce and Southside were doing at that time and he moved to Asbury Park.  It was while he was living in the area that he became acquainted with Vini “Mad Dog” Lopez, the original drummer for the E-Street Band, who resided in Ocean Grove, a mere stone’s throw from Asbury Park.  James had sat in with Vini’s world famous “Disco Rejects” on numerous occasions before he was eventually asked to join the band.  As they performed one night at The Rumrunner, in Sea Bright they were watched by none other than Bruce himself.

Feeling like the club scene had changed, coupled with the desire to work on his own material, James parted ways with Vini and moved south to Florida in 1993 where he put together a R&B band called “The Big Show”.   However, a request to be best man at a friend’s wedding took James back to Los Angeles and while he was there he ran into some other friends that he’d met in New Jersey through Toby Scott, Bruce’s engineer.  “The Lonesome Romeos” managed to convince James that there was “gold in them thar’ hills” and he stayed!  For James, one of the highlights of living in “The City of Angels” was when he went to see The Dave Edmonds Band playing at the House of Blues on Sunset Strip … Bobby Bandiera was on guitar!

For the past 2 years, James has been working on El Corazon Negro which he recorded  between autumn ’95 and summer ’96.  Hal Selzer recently wrote a really great “flashback” column in The East Coast Rocker about James and his days with The Valiants in which he describes the music on this CD as being “… a Creedence Clearwater-influenced blend of rock and country, similar in style to Steve Earle…”.  A review also appears in Backstreets #56 which was penned by Bob Makin.

I’ve listened to this CD a lot and, it just keeps getting better. I love the upbeat tracks, but it’s so much more than a collection of sounds created from slide, bass, 6 or 12 string guitars backed up by vocals, an organ and a solid drum beat!  There is some incredibly beautiful grand piano playing from Dave Claus which is featured particularly on Patrick’s World and Somebody To Hold.   James sings a line in Patrick’s World which would melt an iceberg – “… nothin’ feels better than tequila and friends …”.   OK, so I’m not fussed about drinking tequila, but listening to these 2 songs together with the wonderful, acoustic ballad Jersey Soul just makes me wanna turn down the lights and find somebody to hold.  El Corazon Negro may be Spanish for “The Black Heart”, but these songs are very definitely sung from James Deely’s heart.

Apart from El Corazon Negro, I’ve also had the pleasure of hearing 2 of James’ earlier releases – Custom Made and Set The Night On Fire.  Both of these fall into the “hidden treasure” category and I’m so glad I got to hear them.   Listen to these and you’ll find yourself wishin’ like crazy that you’d been in The Stone Pony catching this band for real.

So, how do you get a copy of these, I hear you ask!

Check out James’ Website – www.jamesd.com  Browsing his pages will not only give you further information but also an opportunity to  to hear a sample of his music.

I’d like to finish by sharing some of James’ thoughts about the music scene he belonged to.  He says: I am extremely proud to have been a part of the greatest scene in the history of music and believe me, it was something real special back then in Jersey.”