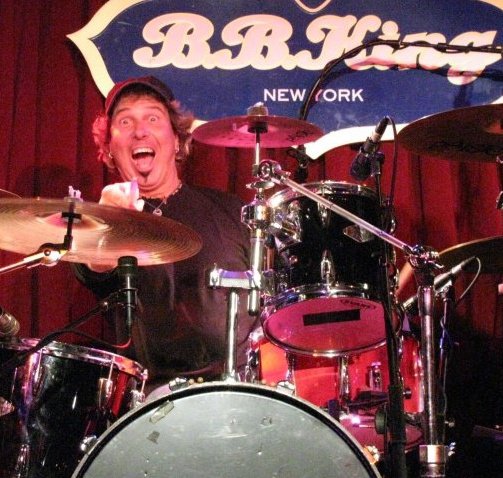 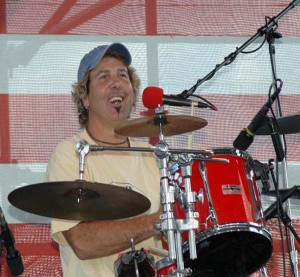 About eighteen months ago, I saw Lance Hyland Stark play a set with Bobby Bandiera and bassist T M Stevens during the course of a benefit event which was hosted and staged at Cheers in Long Branch. At the time I didn’t really know too much about Lance, but since I made that trip in the autumn of ’96, I’ve discovered lots of interesting things about the drummer whose name I couldn’t recall!

It would appear for example, that within the local scene at least, Lance has a reputation for presenting a wild stage show when he performs. Forget just-sitting-there-keeping-the-beat for a game of soldiers, this guy has been known to throw his sticks twenty feet in the air, run around his drum kit and has even played standing up while maintaining a degree of rhythm! Given the actual dimensions of the stage area at Cheers, I didn’t get the chance to witness these antics firsthand, but nevertheless, it was still a great performance. 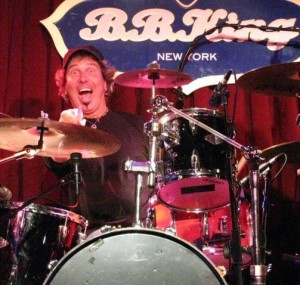 I recently picked up an e-mail from Lance telling me that he had just constructed his own Website on the internet and when I checked it out, the first thing that I saw on my computer screen was a brilliant photograph of Bruce Springsteen being backed by Lance. When I replied to thank Lance for making my day, I tentatively asked him if he would like to share a little bit about himself for the benefit of the readers of The Ties That Bind. Lance kindly agreed and what follows is a brief insight into his life as a Jersey Shore musician.

I began by asking Lance to tell me about the photograph and he explained that it had been taken at Cheers during one of his regular gigs with Bobby Bandiera. It had just been one of those Wednesday nights that most of us non-New Jersey residents dream about, when Bruce dropped by for a drink and decided to jump on stage to play with the band. The bassist that night was Paul Ossola who went on to work as the regular bass player for the US TV show, Saturday Night Live.

Lance told me that his first appearance with the Bobby Bandiera Band was almost ten years ago when he filled in for one night at a small club in West Orange, NJ., but things worked out so well that he was soon doing more and more gigs at clubs like Cheers and The Stone Pony. Lance told me that working with Bobby has given him the opportunity to perform with some of the top musicians on the scene today and that for him, it is the coolest high when it happens.

Lance’s drumming career began before that though and, a lot closer to home. He comes from a family which has a strong musical background and apart from having a brother who plays guitar, sings, writes songs and has just released a book on sound reinforcement, Lance’s mum is also a musician. She plays keyboards, sings in seven languages has toured with Frankie Avalon and has recorded many of her own songs.

Around the time when Lance was eighteen, his mum was doing a lot of band work of her own and from what I can gather, she made him an offer he couldn’t refuse! Basically she told him that if he were to learn to play either the trumpet or the drums, she would be able to hire him for all of her gigs.

Lance confessed to being attracted to the music scene initially by the amount of money he could make by playing in a band and with this in mind, started banging on an old drumset that he had in his basement. He told me that this kit consisted of a bass and snare drum with hi-hat cymbals that were inclined to invert if he pressed the pedal too hard. This meant of course, that he would have to stop in the middle of a song to bend them back into position!

He told me that he practised to every type of music he could get his hands on and after only a few months, got a chance to play one night when his mum’s regular drummer got sick. After that gig, Lance became his mum’s steady drummer and although he started out for the financial rewards, it wasn’t long before he fell in love with his instrument investing the money he made from playing into buying all sorts of accessories like chimes, gongs, tubular bells etc. Lance also told me that by then he was rehearsing as much as eight hours per day proving beyond doubt, that practise really does make perfect.

As for drumming influence, Lance says he liked the music that seventies band Gentle Giant recorded, admiring the use of the odd time signatures and melodies that brought their music to the edge.

Although I’ve only seen Lance perform live once so far, I do actually have a fair amount of recorded material which feature his drumming expertise. These include a track on James Deely’s Custom Made album, the self entitled CDs from Silent Witness and Tenfold which were released last year and most recently, a tribute CD to Cheap Trick called Stiff Competition. I asked Lance to tell me about some of the bands he plays with and projects that he has worked on.

Apart from being a blast to record, Lance told me that the Cheap Trick tribute CD was the brainchild of John Burlaga of Rock Dream Records in Mercerville, NJ who together with the organising skills of Hal Selzer, got the idea off the ground. Not only do Lance and Hal appear in their capacity as musicians on the contributions from Silent Witness, Tenfold, Sharon Middendorf (of Motorbaby), Frank DiMino (ex Angel) and Eddie Ojeda (ex Twisted Sister), but they actually produced these tracks as well.

Prior to Stiff Competition, Lance told me that he had produced quite a few artists but that this was the first time he’d had the opportunity to work as co-producer while playing with and recording some artists who have been quite famous at one time or another. Since one of his favourite bands was Angel, Lance told me that getting to work with Frank DiMino was an especially cool experience.

There are some twenty-odd different bands that perform on this double CD and anyone who is even vaguely familiar with Cheap Trick’s music should be well impressed with this collection of songs – check out Glen Burtnik’s knockout version of I Want You To Want Me. Stiff Competition is still available from Amazon.com

Next, we talked about Tenfold which features the bass playing talents of Hal Selzer and the distinctive vocals of lead guitarist virtuoso, Greg Prior. The bands’ excellent début CD has a totally solid sound and has a re-vamped version of the Carpenters’ song, Rainy Days & Mondays. Thanks to some creative rearranging from the band, this song has been transformed from its original piano ballad format into an almost unrecognisable kick-ass rock track!

Silent Witness have a follow-up CD called Thrills which is due to be released in the UK and Europe this autumn and since Lance wrote most of the album’s material with fellow band member Hal Selzer, this prompted me to ask Lance how he approached songwriting.

He told me that he tends to write in spurts, jotting down his ideas on whatever happens to be available and saving them until he feels more inspired. He continued by telling me that for him, writing songs has been a steady, learning process and that very rarely does a whole song emerge from him in one sitting. I’ve had the privilege of previewing some of the songs from Thrills and I’d like to mention an outstanding track entitled One Winged Angel.

Every so often, I hear something that really makes me stop and listen. Examples of this include All The Way Home performed by Southside Johnny on Better Days, Back In Your Arms Again which Bruce sings exclusively on the Blood Brothers video and Bobby Bandiera’s Love So Fine from his Dog Loves You CD. One Winged Angel is now part of that collection because it is quite simply one of the most evocative rock ballads I have had the pleasure of hearing.

Thrills is still available here – at least it was, the last time I looked!

Apart from all of the above, Lance can regularly be seen playing in and around the Jersey Shore with Talk Town and Online as well as further afield with the “Greatest R&R Tribute Band In The World” … Sticky Fingers – no prizes for guessing whose music they play!

Lance has come a long way from the days he spent testing the soundproofing qualities of his basement (not to mention his mum’s patience!) and when you read the following two statements from Jersey Shore rockers James Deely and Hal Selzer, you’ll see that he has earned a lot of respect from his friends and fellow musicians alike. This is what they said when I asked them what it was like to actually perform on the same stage as Lance.

James: First of all, Lance is a true professional, always together, top to bottom. His presence is huge, not just drumming but as a person. The guy is so damn loveable, he’s always there, behind the drums and as a friend. When Lance was in the house we all knew we were going to sound great and we were going to have a blast!! I’m sure there’s a long list of musicians who will tell ya that there is nothing better than looking behind yourself on stage and seeing Lance with that big smile, beating the hell out of that red drum kit!

Hal: Playing with Lance is great, he’s a very exciting drummer. Sometimes he over does it and gets too wild! But I’d rather have somebody like that, who always “goes for it” than somebody who is timid. Lance is also always a lot of fun; he can be a really wild guy.

I’d like to thank James and Hal for sharing their thoughts with me and also to Lance for patiently answering my endless questions. I hope that seeing Lance perform is now on your list of things-to-do-in-New-Jersey, but just remember … keep a lookout for low flying drumsticks! 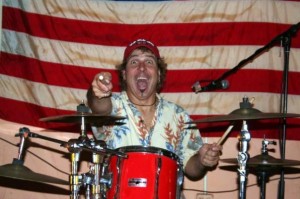