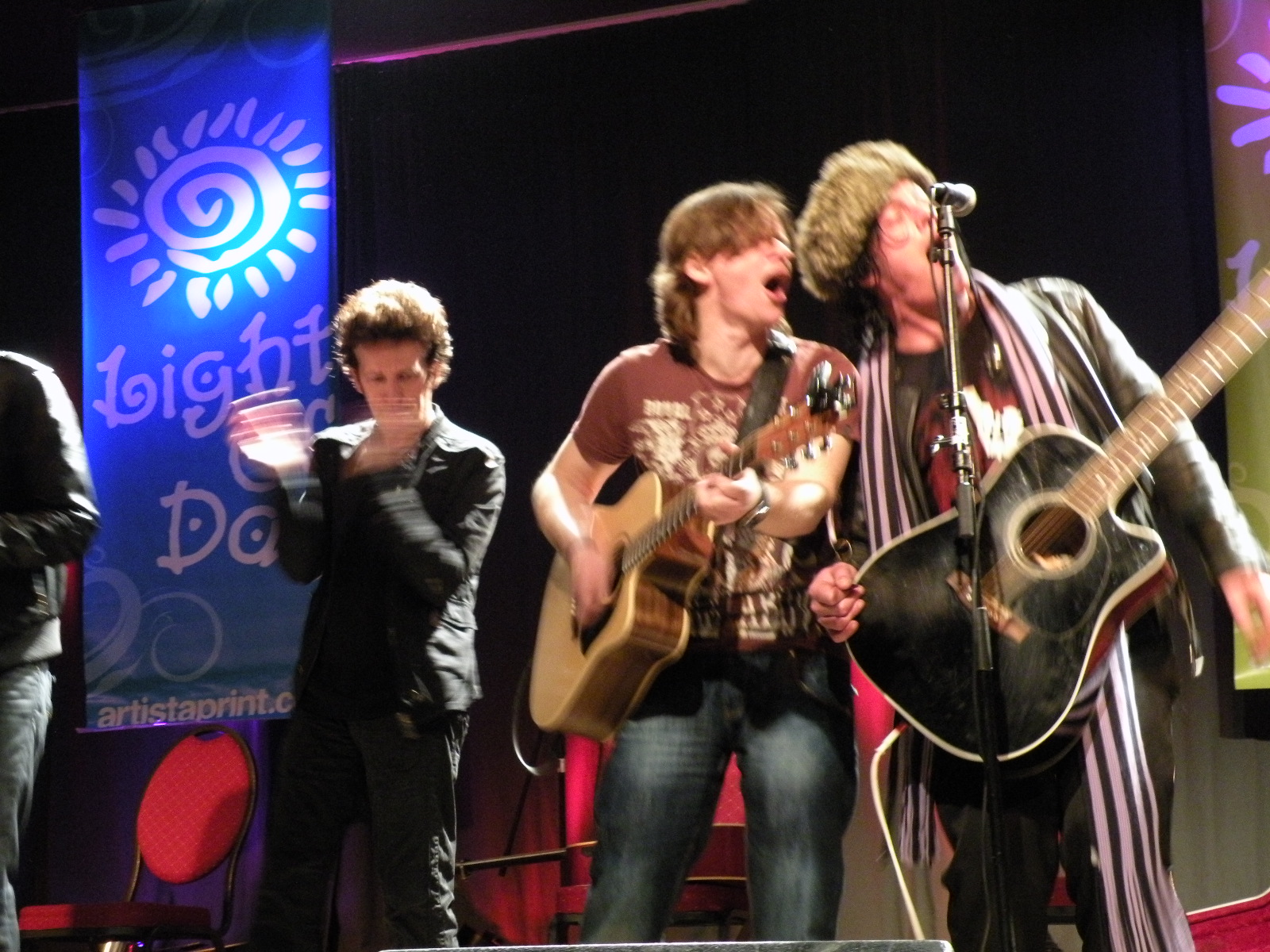 December 4th, 2009 will go down in music history marking the first, ever, Light of Day show to take place in Germany. And what an amaaaaaazing night it turned out to be. However, before I share my thoughts from the front row, this story actually began for me mid-September, 1996 in Amersfoort, The Netherlands.

The occasion was a Springsteen Convention, organised by the Dutch Fan Club, Roulette, part of which was a live music programme. It featured Pittsburgh rockers, Joe Gruschecky and his band, the House Rockers, whose European tour was supported by Scooter (Martin Praetorius) and the Streethearts, a very popular band from Essen in Nordrhein Westfalen.

The Houserocker’s manager was, and still is, Bob Benjamin, well-known throughout the tri-state area of New York, New Jersey and Philadelphia  for his involvement in the music scene. During the course of the Convention in Amersfoort, I got to meet Bob and we had a bit of a chat about NJ’s wealth of talented musicians, a subject that still lies close to my heart.

What I didn’t know that night was that Bob was already suffering from Parkinson’s Disease.

It was because of his illness that Bob actually became the founder of the Light of Day Foundation Charity something which began at his 40th birthday party when he asked for donations to help Parkinson’s research instead of gifts.

Since then, the LOD road show, steered by Joe D’Urso, has visited countless cities and countries but until December 4th 2009, Germany hadn’t quite made it to the list.

So, back to Melle or, “the night of a thousand guitars”, to quote Martin Praetorius!

For the second time in as many months, there was magic in the Melle night thanks to owner/promoter of the Honerkamp Ballshaal, Volker König, who agreed to hosting the concert within a nano-second of asking. The larger-than-life sized poster outside the venue, as well as the placards decorating Melle’s lamp-posts, paved the way for what was to be an incredible night of music.

The show was billed as an acoustic LOD… you know, unplugged, stripped-down, easy-on-the-ears sort of thing… well if it was, I certainly didn’t notice!!! This show had the 3 p’s – power, passion and performance – of a full-blown, plugged-in, stadium-sized concert ala Springsteen/Asbury Jukes, minus the horns! Although, when I think about it… David from Marah was ever-so-slightly reprimanded for playing too loud during the sound-check so maybe that was an indication of what was to come!

Volker set the scene by arranging bistro style furniture around the hall, placing tea-light candles on each table and in doing so, created a warm and friendly atmosphere for the audience and LOD musicians alike. Outside, and just around the corner from the LOD show, the Christmas Market ambiance sent its own message of warmth and friendliness, something which impressed David and Christine from Marah as they took a pre-show wander round the different stands that were decorated with fairy lights and spruce. It’s impossible to ignore the wonderful aromas of roast bratwurst, or baked apples or freshly made waffles or spices like nutmeg, coriander and cinnamon mixed with orange and mulled wine – all very intoxicating and that’s before you hit the shots of amaretto, rum and whatever else can add a kick to mug of steaming hot chocolate!

In keeping with the LOD tradition of having a “local” artist join the line-up, Martin Praetorius – as in lead singer/songwriter of the band that supported Joe Gruschecky’s 1996 European tour – agreed to be part of the evening before the question was fully presented to him! Considering the fact that this request  actually happened a mere 18 hours before show-time, I would like to take this  opportunity of saying an enormous “thank you” to Martin for being there at shorter-than-short notice.

Together with NY/NJ musicians, Don DiLego and Rob Dye, Martin was part of the opening act. He came onto the stage, took the mic and welcomed everyone auf Deutsch, an appropriate start to the first-ever German LOD. He also related the Amersfoort story which added a poignant touch as Martin spoke about his personal connections to Bob Benjamin.

The set up of the acoustic LOD is like a “round robin” where the musicians perform on their own and then pass the spot on to the next guy. Martin, Don and Ron each
performed two of their own compositions and then they came back out together with a storming version of Neil Young’s, Heart of Gold – wonderful stuff from  three guys who had never played together before.

After that, JoeD’Urso, Willie Nile, Jesse Malin and Marah (David Bielanko/Christine Smith) took over, accompanied only by acoustic guitars and Christine’s keys. Christine actually added a little festive touch by playing Santa Claus is Coming to Town while the final tuning-ups and stuff were going on. Incidentally, there is an interesting LOD (lowest obvious denominator) about these particular musicians and that is, they have all shared the stage with Bruce Springsteen, or maybe it’s the other way round! In any case, that is one thing they all have in common – apart from being great musicians and supporting a great cause, that is.

With the exception of Willie Nile, I’ve seen all of the other musicians perform in their own right so I had an idea of what might be coming. The one thing I was not expecting was the way in which the musicians came out and hit the stage running – think Batman and Boof! Kapow!! Bam!!! – yes, it was a bit like that as with each turn, the momentum picked up a gear or three.

As for individual accolades, Joe D’Urso’s set included wonderful renditions of: Rock and Roll Call, Waiting on the Train and a fabulous sneak-preview of his solo version of the Steve Van Zandt classic, All I Needed Was You – the last two songs are on Joe D’Urso and Stone Caravan’s brand new CD, Down By The River. Of course, Jukes’ fans will have noted that December 4th is Southside Johnny’s birthday, something which Joe also acknowledged, raising a glass – or maybe it was a bottle of Beck’s – in the direction of Johnny’s picture which appears on the frieze that still decorates the club wall, directly over the bar.

Willie Nile’s set simply blew me away! His House of 1000 Guitars kicked ass, and then some! His piano solo on New York was beautiful and his anthem, One Guitar got an audience reaction akin to Born to Run. Btw, Willie actually went on to perform at a show in Hannover the following night, December 5th, and it was brilliant to see him there with his own band which included the amazing talents of Johnny Pisano on bass.

Seeing Jesse Malin (from the front row) was pure magic. I saw Jesse a few years ago in Sheffield and let’s just say, he certainly hasn’t lost any of the energy that I saw back then. When he started to sing Hotel Columbia it felt like he was performing with a full backing band behind him. Jesse is one of the most avid performers I’ve ever seen and he gives his all, always. His opening joke about never having played in a club called “Balls” had the place in an uproar… he was of course referring to the name, “Ballshaal” which of course is just one of these “false friends” that pop up a lot between English and German! It was also great to hear Brooklyn and Dark Haired Girl… and as for our chat at the merch table afterwards?? No worries Jesse, that will stay a secret!

Coming in at #4 on the rotation list was Marah, comprising David and Christine, and they certainly lived up to their reputation of being exciting to see. David talked about his and Christine’s stroll round the Christmas Market and was clearly impressed by it. Performance-wise, he and Christine were incredible. Christine Smith is one multi-multi-talented lady… she looked fabulous, she sang and harmonized with perfect pitch while playing keys with her left hand and shaking the tambourine with her right! It was really great to hear them play again and I think the moment that made me smile the most was watching Reiner, aka the Guardian Angel of Cigarette Lighters, appear at the front of the stage as if in answer to David’s prayers as an unlit cigarette dangled, in anticipation of being lit, from the corner of his mouth.

After a good couple of hours of 24 carat entertainment, we were treated to a finale which included all of the musicians trading licks and vocals on: I Wanna Be Sedated, Rockin’ In A Free World and… New York,New York.

It seems a little ironic that something as tragic as Parkinson’s Disease should have been the catalyst for all of the above but I guess if ever “good” came out of “bad”,
then this was it.

It was a fantastic night… musicians, venue, audience… it was the perfect mix for what I hope was the start of a new tradition. My sincerest thanks to everyone who was involved in this first, ever Light of Day Concert in Germany and here’s to the
next time.