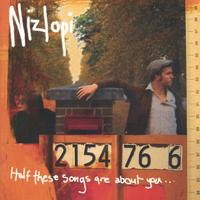 A seven-letter word containing three vowels, four consonants and three syllables… hmmm… kinda sounds like something you might see on a Scrabble board, right? Maybe… but… beyond the technical language stuff, “Nizlopi” also happens to be the name of one of the most creative sounding UK acts I’ve come across in a while and comprises two latter-day disciples of musical genius.

OK, so let me try and break this down some more.

The second reference is aimed at Luke and John, the dynamic duo whose collective talents make up Nizlopi and whose meeting on a school bus when they were just thirteen years old, has since taken them on a magical, mystical tour that’s also very much on-going.

When it comes to originality, Luke and John appear to have gone where no men have gone before in terms of bending and shaping sounds that are both meaningful and appealing to a wide audience as per their recent showcase gigs at the “South By Southwest” annual music festival in Austin,Texas.

In addition, the guys have also got one of the most incredible Websites I have ever come across! So, in case you thought you’d been there, done it and seen it as far as the www is concerned, please allow me to inform you that the cybergoalposts have just been moved.

In support of their latest release, the JCB Song, a track taken from Nizlopi’s critically acclaimed album, Half These Songs Are About You, a mere click of your mouse on www.jcbsong.co.uk will take you directly to an absolutely amazing cyberplayground!

Click on the pencil – while simultaneously holding down your left mouse button – and it’ll let you write your name on the cover of the exercise book that welcomes you… click on the dog-eared corners of the exercise book pages and you’ll find all sorts of interesting info about the band as well as some background about the JCB Song… go to the doodle page and if you click on the pencil again, you can do just that… leave a message for the band and the font comes up like you were 5 years old again and learning to write… click on the animated JCB and it’ll take you back to the home page! Wonderful stuff and very cleverly designed.

When Bruce Springsteen made his speech at U2’s recent induction into the Rock & Roll Hall of Fame he said something along the lines of: “…in art, love and rock and roll, the whole had better equal much more than the sum of its parts, or else you’re just rubbing two sticks together searching for fire…”