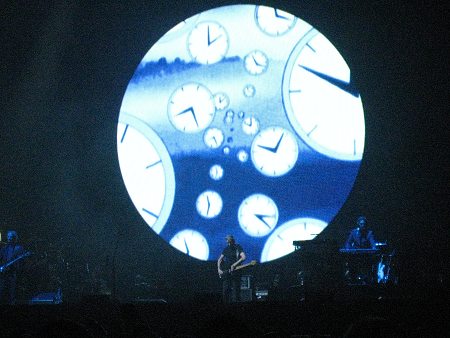 Hmmm… so yeah, I wasn’t exactly the happiest of bunnies as I headed for Hamburg to see this gig… and yes, as anticipated, the tail-back at the Elbe Tunnel lived up to my expectations! But you know, once I’d parked my car in front of the AOL Arena – which is across the road from the ColorLine Arena – found someone willing to purchase my spare ticket and made my pilgrimage to the bratwurst counter at the venue, the world started to look a brighter place.

And that was before the show began.

I say “show”, but strictly speaking, this was a “production”, the calibre of which I hope I can do justice to.

The pre-show music featuring Tom Petty followed by some early Bob Dylan got a thumbs-up approval from me… I loved the retro backdrop which switched from “still” to “animated” scenes featuring a radio, a whisky glass and cigarette smoke… coupled with the dry-ice effect from the stage, it was all very atmospheric.  A lovely moment happened when a hand suddenly appeared from the corner of the video screen to twiddle with the tuning dial and Waterloo came blasting out of the speakers… you could hear the collective groan of disapproval echo around the arena followed by a collective sigh of relief when the frequency changed to another channel which immediately became a groan again as another Abba song reached our ears – think vocal Olympic wave and you’ll get an idea of the effect!!  All very entertaining and a clear sign that the audience was indeed, paying attention.

And so to the first blinding pyroblast which illuminated the stage with an intensity that was to match the rest of the evening.

Roger Waters’ stage presence was stunning… dressed in black ala Richard Gere-esque, Roger had the audience captivated as he performed his way through a set that blasted the wow-factor into another stratosphere.

From my second front row seat, I was close enough to see the colour of Roger’s shoe laces, so yes… when I tell you that I want I saw resembled a proverbial cat that had licked the cream, that’s just what I thought every time I watched Roger smile. I overheard someone say, “He’s a perfectionist.” Based on last night’s experience, I would say that was evident and in that respect, Roger had every right to look satisfied.

Each band member played their individual part faultlessly and their collective part with an immaculate preciseness that mirrored the performance of the man-in-black.

In short, a totally wonderful experience and the perfect anti-dote for chasing away the blues!