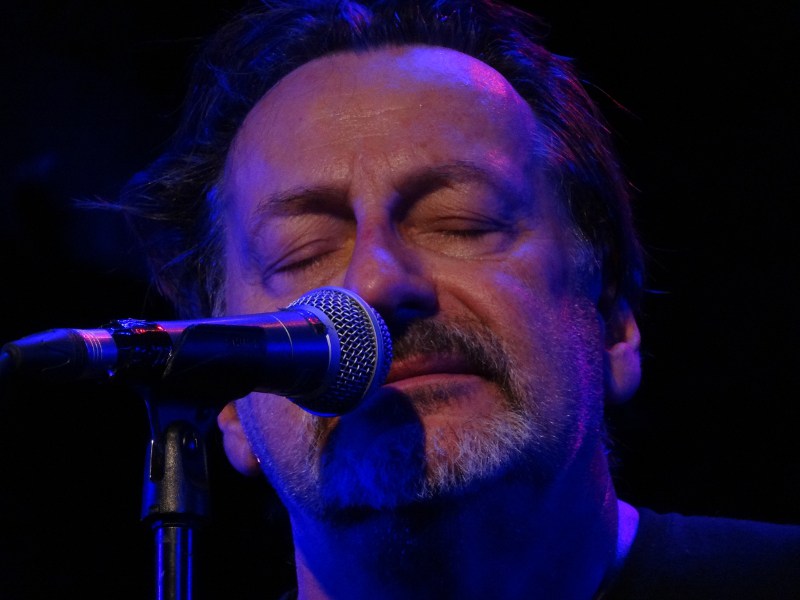 Southside Johnny and the Asbury Jukes – STILL the Greatest Bar Band in the World! 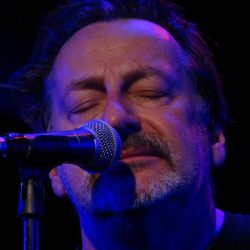 Southside Johnny and the Asbury Jukes earned the title of being “The Greatest Bar Band in the World”, waaaaay back in the day when they became famous for playing the legendary bar scene that speckles the Jersey Shore.

Fast forward to now and the music scene is still there, the band is still playing and more importantly, still delivering that magical sound as in the one that first captured my attention back in the very early 80s – Spring 2016 shows in Hamburg and Bochum stood testament to that.

There have been one or two changes within the Jukes’ Family Tree along the way, for sure, but somehow that has never impacted the overall performance and at the end of the day, WYSIWYG – in other words, what you see is what you get… that unadulterated, instantly recognisable blend of Jersey Shore rock, soul and blues delivered with a passion that always makes me feel like I was hearing it for the very first time.

Southside Johnny is the undisputed leader of the band, of that there is no doubt but he always makes space for the other band members to come through and shine in their own special way, allowing us, the audience, to experience and enjoy the undeniable talents that exist collectively as well as individually, within the band.

When the 2016 European Tour Dates were announced, I unashamedly punched the air when I saw that my birthday coincided with the Bochum gig – in the entire history of my concert-going road trips, this was indeed a first and just so cool to be able to share the show with so many good friends who have been a part of my “music life” for the longest time.

The Hamburg show took place on May 8th in the Fabrik and in my experience, it’s not often that clubs take the trouble to offer information to out-of-town concert-goers with regard to nearby parking facilities etc. – most times you’re left to figure stuff like this out yourself with the aid of Google maps but the Fabrik does a particularly good job in this respect and consequently, following their website info will ensure a stress-free arrival in Hamburg.

A fabulous choice of songs, including a stunning Many Rivers To Cross from Jeff Kazee, rocked the packed Fabrik. The set was a classic mixture of old, new, borrowed and blues presented and delivered as only this band can.  Plus, when Johnny called out to the audience and asked how to say “Talk To Me” in German, we instantly obliged with a chorus of: Sprich zu mir bevor die Nacht vorbei ist!  Btw, for the benefit of anyone keeping fashion stats, Johnny was wearing a “Billy Walton Band” tshirt and white, patterned Chucks – if you click here, you’ll find a totally impressive set of photographs taken from the front-row by, I-danced-with-Southside-Johnny-in-Osnabrück, Gundula Boettger. 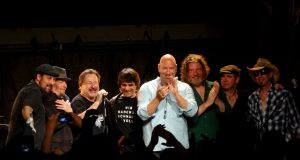 And so to Bochum, aka, The Birthday Show which, as it happens, turned out to be a double celebration with me and Guido Beckers sharing the same day… how cool is that? Could be the reason why our musical tastes and experiences are very similar!

So, en route to Bochum, the tour bus landed on the Highway to Hell – that would be the A2.  But even in the face of adversity – in Germany it is called a Vollsperrung or, in other words, you ain’t goin’ nowhere – the bus got through the traffic chaos after a marathon 15 hour journey (give or take) from Berlin. And how does a band like the Jukes deal with the frustration of a situation like that? They hit the stage running and deliver a show like it was their last day on earth!  Shake ‘em Down as an opener totally kicked ass dispelling any – and I mean ANY – thoughts that the traffic delay might have somehow impacted the task in hand.

As for Gundula, who was hopping up and down beside me while taking yet more stunning photographs, this was her dream set-list, she informed me as she mouthed the words in the direction of my ear… Passion Street, Spinning, Working Too Hard, All The Way Home, and… and… and…!!!  All The Way Home actually subbed “my” personal request which is a closely guarded secret between only a handful of THE chosen few and the band of course until they decide to play it, that is! 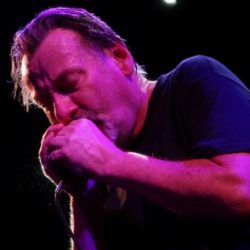 When I finally came back down to earth and had a chance to reflect on both shows, at least 30 – yes, 30 – of the songs were played once only and as if that wasn’t enough to get your head round, in all the years I’ve been going to see the Jukes, I have never seen Hood taking over the keyboard from Jeff Kazee while Jeff joined Tom Seguso for a double drum-act… a strange, strange, feeling… or what??!! 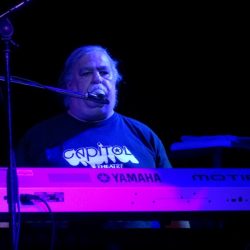 And yes, for fashion pundits, the red Chucks were tonight’s chosen footwear but the shirt-of-the-night award went to…. Glenn Alexander for wearing his teeeee from BOSPOP 2010, way to go, Glenn! 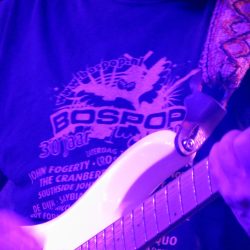 It was a stoater of a show… and yeah, I know we don’t get the chance to see the Jukes as often as our friends in New Jersey but, in accordance with the illustrious title that was bestowed upon me by the late and still missed, Bill Durborrow, this particular Jukes’ European Correspondent – Without Portfolio (that’s what Bill always said!), had a birthday to remember.

To: Britta, Carina, Gisela and Jacques, Guido and Ruth, Gundula and Klaus, Joe Prinzo, Karen, Ralf, Rea, Reiner, Selim… so great to share this gig with you and a special “thank you” to Gundula for allowing me to use and share her wonderful photography skills here.

Southside Johnny and The Asbury Jukes were: