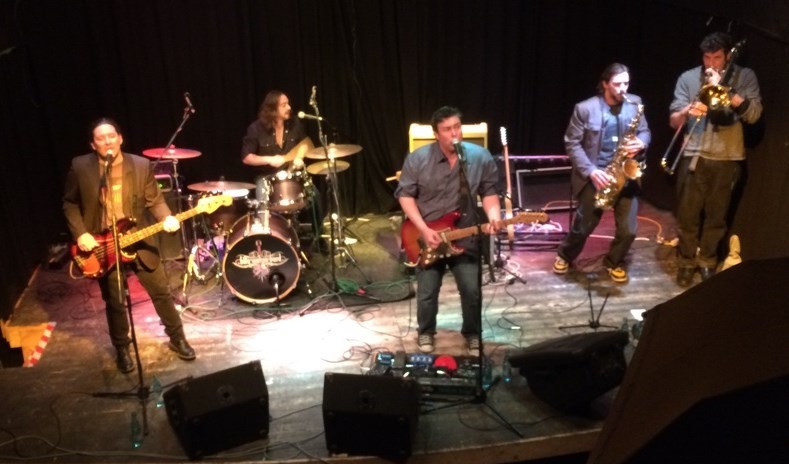 I would imagine that existing Billy Walton Band fans reading this are probably adopting a nodding-dog-on-back-parcel-shelf-of-car-mode as they quietly smile at my thoughts here. For sure, I had heard of the band and they were on my bucket list but I hadn’t quite gotten to see them until very recently, that is… so please forgive me if I appear to be preaching to the converted, as it were!

On 16 April 2015, the Kulturwerkstatt Buer e.V. played host to what was one of the best Jersey Shore extravaganzas I have ever seen… it ticked all the boxes… it had that instantly recognizable mixx of rock, funk, blues and reggae fused with horns, the solidity of a stellar rhythm section, and a front-man seemingly epoxied to his Fender Strat.

Over the years, all of these eclectic musical components have somehow formed a base that epitomizes the legendary sound that I have come to associate with the New Jersey music scene.

Add to that, the soul… and I don’t just mean, “Stax-soul”, although a totally ab-fab version of Sam & Dave’s 1966 hit, “Hold On, I’m Coming” did feature in the multi-genre sets I saw. No, I‘m talking about the moral fibre that pulses with every heartbeat, firing the turbo-charge behind the passion-filled deliveries of mesmerizing finger-work that electrify the night air with sounds that make the hair on my forearms stand to attention kind of “soul”!

In a nut-shell, that was my first impression of seeing The Billy Walton Band, live.

Accompanying Billy on this tour were the collective musical skills of fellow band-members:

It was a delight to see the interaction between these guys and the way their individual talents unified… it was as if there was an invisible thread that bonded them together as a solitary, impenetrable unit the nanosecond they hit the stage and oh yeah… did they hit the stage… the flag dropped with the first drum beat and they didn’t let up until the last note of the last song drifted off to join the stars that were ear-wigging above at both shows I was lucky enough to be at.

Curious to know a bit more about Billy’s musical journey thus far, I managed to have a quick chat with him and he told me that part of what I was witnessing was a result of him having been mentored by the likes of former band members of the Castilles and Steel Mill along the way – that would be George Thiess and Vini Lopez, respectively. He also played guitar, sang and toured with Tony Amato’s, Boccigalupe and the Bad Boys, a hugely popular band from the Shore music scene, before forming the Billy Walton Band in 2007.

Billy even got a call from Southside Johnny inviting him to become a Juke which he duly accepted and as a consequence, ended up touring England with the band, a fact which might have slightly influenced the set list choices as per the “Once a Juke, always a Juke” philosophy!

But for me, as a Billy Walton Band newbie as it were, I was simply blown away by Billy’s own incredibly well-written, original material that was delivered by someone I can only describe as, a master guitarist.  You really had to have been there to see the guitar pick air-flips (caught without missing a beat I hasten to add) as well as to hear the mind-boggling sounds that Billy coaxed out of his Fender… and yes, while I was watching Billy’s fingers gliding up and down his fret board at the speed of light, I couldn’t help thinking that I was watching the next generation of Jersey Shore guitar heroes – there must surely be something in the NJ water that manifests itself into talent like this – or??!!

“Wish For What You Want” is the latest CD in the Billy Walton Band’s catalogue of recordings and presents all of what I said above about the mixx of sounds that have that o-so NJ stamp on them – I had my copy in my car with me for company on the way to the show in Melle-Buer and was already lovin’ the catchy hooks on, It Don’t Matter, which features the super-sax-playing-talents of Joey Stann on the CD version (Southside Johnny also makes a harmonica appearance on, Blues Comes A Callin’).

In Melle-Buer, Mountain, True Lovin’ Man, Come On Up and Till Tomorrow all featured with aforementioned, It Don’t Matter from “Wish For What You Want”. We also got the superb and co-written with William Paris track, Radio, from, “Neon City” and Deal With The Devil, One In A  Million and Hot Blues from the “Crank It Up!” album.

Talk To Me was a welcome surprise for the Jukes’ fans in attendance and an audience request for Rosalita very definitely did not stump the band! Talking of stumping the band… towards the end of the show, Billy steered the band into a medley of classic songs that included teasers from the likes of Chuck Berry, ZZ Top, Chicago, Canned Heat and The Temptations to name but some of what I recognised but will maybe give you an idea of the diversity of the genres The Billy Walton Band are more than capable of performing – even when they don’t know what’s coming next.

A couple of weeks later, I set off for the incredibly picturesque Hanseatic City of Lübeck  for a second dose of The Billy Walton Band having decided that seeing the band once really wasn’t enough! The set list in Lübeck’s Funambules as in, klein aber fein venue necessitating in Billy’s amp facing the wall – I guess to minimize eardrum overloading – included additional surprises like, From Small Things (William on vocals), New Orleans and We’re Having a Party as well as a selection of some of the material listed above but laced this time with spontaneous walkabouts/movin’-n-groovin’ on the dance floor/behind the bar from the horn section members of the band.

Wish for what you want? Absolutely… and for sure, a re-run of the Jersey Shore fun that I saw in Melle-Buer and Lübeck is currently at the top of my wish list!

So, until that next time, I’m going to enjoy listening to the new CDs in my collection and will raise a glass to the future success of The Billy Walton Band, who (in-my-sometimes-not-so-humble-opinion) are one of the most exciting and talented bands to emerge from the Jersey Shore in recent years – said she in a very Jon Landau sort-of-way.

Thank you so much for two fantastic shows and as they say in my original homeland, haste ye back!

Sincere thanks to Rupert Peters for giving me permission to publish his photographs from Melle-Buer and Lübeck.