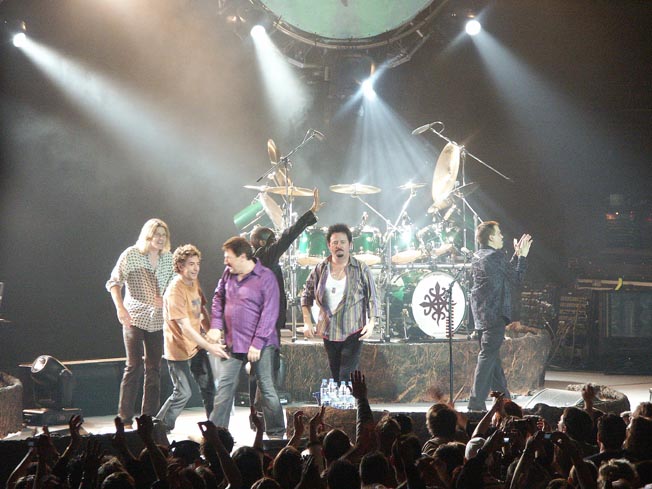 Originally known as the Gaumont Palace then the Hammersmith Odeon and now the
Hammersmith Apollo, this legendary London venue has been playing host to some of the biggest names in rock music for decades, including Bruce Springsteen, whose 1975 concert was released recently on DVD as part of the Born To Run 30th Anniversary box set – I missed out on that particular show unfortunately and will be eternally grateful to the powers that be for sharing it with the world. On the other hand, I’m happy to say I still have my pink ticket stub (Circle Block 11/D2) from the Little Steven and the Disciples of Soul gig that was presented by PLP and Capitol Radio on 11th September 1985. So yes, it would appear that a mere twenty years have passed since the last time I set foot in this place – scary!

However, before I share my thoughts about Toto’s show, their new album and their mind-blowing individual as well as collective musical skills, I’d like to digress a little with a couple of interesting connections I’ve discovered between Toto and the New Jersey music scene I’ve become familiar with over the years.

For example, on the 1997 Springsteen tribute CD, One Step Up, Two Steps Back, there is a track called Protection which was sung by Donna Summer. There are only two tracks on this double CD set that actually feature Bruce and on this particular song he was aided by Steve Lukather, David Paich, Greg Phillinganes, Steve Porcaro and brother Jeff, Toto’s original drummer who sadly passed away some fourteen years ago. Jeff Porcaro’s name also appears on the credits for Patti Scialfa’s 1993 release, Rumble Doll and, while we’re still in this groove, Greg Phillinganes joined Jersey Shore rocker, John Eddie, on his self-entitled 1986 CD. And yes, I do enjoy reading the sleeve notes on CDs which is how I discovered that Pamela Springsteen – sister of aforementioned Bruce – did the photography for Falling In Between!

Fast-forwarding to now and my reason for returning to the Hammersmith which was to see the opening night of Toto’s “Falling In Between” tour in support of their brand new studio album of the same name.

Prior to the actual European release date of 10th February, several of the German music magazines ran articles on the release of the new album. One of them, “Rock It!”, featured the entire band on the front cover as well as an extensive interview with Steve Lukather together with a freebie sampler CD that included a cut of Bottom of Your Soul. So, by the time the show came around, I’d had a bit of an opportunity to listen to the new material on this latest studio release from the band.

My initial impression of the album was that I wanted to play it again and then, it became clear that referring to the songs as “tracks” was in fact, a major injustice to the quality of the work I was holding in my hand.

I can’t actually pin a label on Falling In Between in terms of genre… suffice to say it is an eclectic mix of rock/pop/jazz-fusion/funk and new-world sounds, all written and performed by musicians whose sheer love for what they do, is most apparent. Individually, all of Toto’s band members are world-class performers and each of whom has a staggering credential/discography list… so when you put that collective talent together on one album or on the same stage, then yes, we are talking in serious superlatives.

So what to expect of the show? Well, I figured I’d just wait until the house lights went down to find out.

To begin with, the stage was hidden behind a screen replica of the CD artwork and when it dropped to the floor, the band simultaneously blasted into a blistering version of the title track, Falling In Between – think Formula 1 Grand Prix race starting and you’ll get an idea of the power of the sound that suddenly filled the theatre!

King of the World was next, then Pamela… and it was as if the precedent had been established, because what followed was a non-stop blend of “old” and “new” material that included some of the songs that are distinctly “Toto”, like Hold the Line, I’ll Be Over You and Bottom Of Your Soul, one of my favourites from the new album.

About a third of the way into the set, the band came together centre-stage for an “acoustic/jazz set”… well, not quite “acoustic”, but it was a trimmed down, cosied-up version of the band that included a mini version of the USS Phillips drum kit. It was a bit like watching a jam session as the guys gathered round Greg’s keyboards to perform a medley of four or five songs. Altogether very intimate and most enjoyable seeing the guys perform in such an informal and relaxed way.

Picking out one particular highlight from a show that was full of highlights isn’t easy but I think the version of Rosanna has to be mentioned… it began as a slow, kinda jazzy/acoustic arrangement then boof… exploded into the full-blown real deal after the first verse – wonderful stuff!

Africa – the song that was oh-so significant by its absence at last year’s Live 8 concerts – was the closer for the show and in David Paich’s absence, Greg Phillinganes delivered his vocal version of this timeless classic, impeccably.

As I said above, describing the level of musicianship within Toto is verging on impossible simply because each band member is a master at his craft. But, having said that, I find watching Steve Lukather’s fingers coaxing sounds from his Fender guitar strings a simultaneously sensual and mesmerising experience – I actually caught one of Steve’s shows last November when he was touring with his solo band, El Grupo, and from my dream seat (second front row dead-centre) I sat there for the best part of two hours totally transported to another world.

As for the prime members of the rhythm section… Simon Phillips and Mike Porcaro’s joint dynamic talents put them on a level that has to be beyond compare… I can’t say anything about their skills that would do justice to their performances so you’ll just have to believe me when I tell you they were awesome.

As was Greg Phillinganes… even his keyboard was dressed for the occasion prompting a good-humoured comparison to the “Starship Enterprise” by Steve at one point!

Bobby Kimball and Tony Spinner combined their vocal prowess delivering the sounds and harmonies that have become Toto’s trademark over the years… in addition, Tony added his own special touches on second guitar.

Altogether, it was a brilliant, sold-out performance from a band that has been sharing its sounds with the world for almost 30 years and yeah… they came, they saw, they sure as hell rocked – and that was just the audience!

Check out Toto’s superbly managed homepage www.toto99.com for everything you ever wanted to know about the band but didn’t know where to find it.

Band members on the Falling In Between Tour: