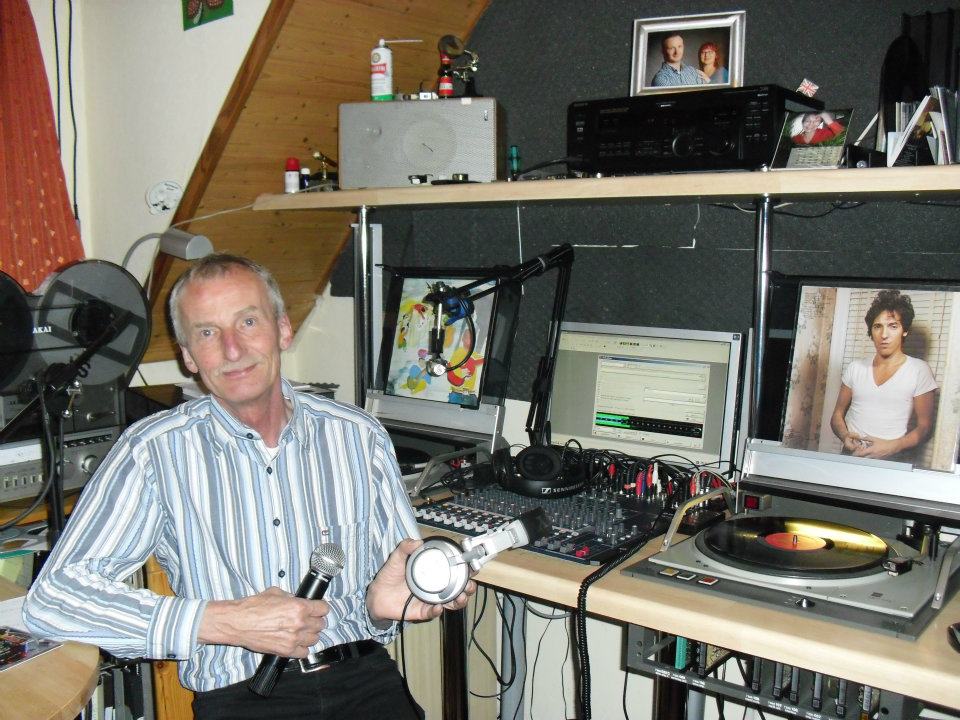 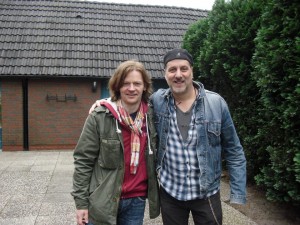 Bill Toms and Martin Praetorius – two outstanding performers from different continents with songs to sing and stories to tell – especially the one about how they ended up teaming-up on internet radio in Schwanewede on a lazy, Sunday afternoon!

And where exactly is Schwanewede you might be wondering?  Well, I guess if you were on a geocaching treasure hunt, Latitude: 53.233 Longitude: 8.600 (in decimal degrees) will lead you to this picturesque corner of north-westernLower Saxony.  Flashing neon lights and all-night bars were certainly significant by their absence as I drove through this quiet, residential town en route to meet Bill, Martin and deichRadio’s “Night Songs” show presenter, Jens Messtorff.  But once inside Jens’ studio, the real world went on hold as the magic of Jens’ music world took us on a journey that captured the power and the passion of a truly live performance.

And how exactly did Bill Toms from Pittsburgh,USA end up performing live with Martin Praetorius from Essen, on an internet radio station in northern Germany?!

And who exactly is Jens Messtorff and how does he fit into this story?

Well, since I know all the answers… let’s see if I can fill the gaps and give you an insight into how this once-in-a-lifetime studio session came together.

To begin with, let’s re-wind to the autumn of 1996 when Joe Gruschecky and the Houserockers were planning a European tour in support of their “American Babylon” album.  In the history of the Houserockers’ recordings, the aspect that made this album “different” from the others in their catalogue was the fact that, with the exception of the title track, it was produced by Bruce Springsteen – more details about the album are explained here.

Long story short, the Houserockers were looking for tour support and Martin’s band back then, Scooter and the Streethearts, got the gig.  It was an arduous but nevertheless hugely successful tour that took in 11 shows that covered 7,500 km… that went from Berlin to Barcelona via Glasgow and The Netherlands in a tour bus …………. over a period of just some 14 days!

And that’s when I entered this picture.

I happened to hear that Roulette, the Dutch Bruce Springsteen Fan Club, was holding its annual fan convention in Amersfoort and that they had booked Joe Gruschecky and the Houserockers to perform.  I’d never seen the Houserockers before so to have a chance to see them virtually on my own doorstep was like a chance to not miss – btw, I consider a 3-hour drive (each way) as “doorstep” for something like this!

As far as Scooter and the Streethearts were concerned… I was a convert within the first three songs and I still love, “Secrets to Tell”, the album I bought that night from Bob Benjamin, the Houserockers’ Manager, and who was manning the merch table during the show.

Basically, that’s how Martin and Bill first met and they have been friends ever since although it has to be said that when they met up for the deichRadio session, they hadn’t actually seen each other since the “American Babylon” tour which is now sixteen years down the line!  And just for the record, I can tell you categorically from my vantage point which was a whole couple of meters away from their microphones, that the time lapse had a zero impact when it came to synching Bill and Martin’s respective musical talents… the moment they picked up their guitars, they were officially re-united. 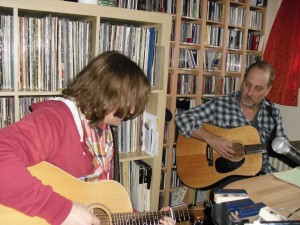 So how did Jens Messtorff become a part of this? 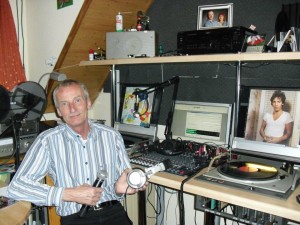 Well, this is where social networking played a role… thank you Mark – as in “Zuckerberg”… and the rest of the story is as follows:

Jens has been a part of deichRadio, an internet station that broadcasts from the Lower Saxony town of Schanewede, for the last five years or so.  His weekly “Night Songs” show presents an eclectic music mix that isn’t always mainstream but nevertheless has an appreciative audience. When Jens heard that Bill was planning a short trip to Germany, he kindly invited both Bill and Martin to perform for his show.  After the tuning and sound checking process was complete, this studio session became an incredibly intimate, hour-long, ab-fab mix of live songs from Bill and Martin… they played individually, promoting songs from “Memphis” and “Affairs of the Heart” – their respective latest CDs.

They also played together creating an impromptu performance the likes of which only happens in spontaneous, live situations like this.  “Moving On Down The Road” presented a unique opportunity for Bill and Martin to jam together and when Bill sang the line, “… come on brother…” directly to Martin, I had serious goosebumps while I was listening to them.   In addition, the whole package was enhanced with some really entertaining background stories from Bill and Martin as well as a couple of poignant in-between-tracks from The Band and Bruce Springsteen.

When you open Bill Toms’ website, there is a wonderful quote from, Will Kimbrough, the producer of his latest CD, “Memphis”.  It says: “Bill Toms is a poet, a soul-shouter and guitar slinger with one foot in the gutter and an eye on the Heavens above.  And man, does he front a great rock n’ soul band!”

When you open Martin Praetorius’ page on bandcamp.com there is a wonderful intro which says: “Martin Praetorius is a singer/songwriter in the true sense: detached from the trends of the music business, he writes songs that only need a guitar and a voice to sway an audience.”

So what happens when these two dynamics come together??

Sparks on deichRadio… that’s what!

It was an amaaaaaaazing experience to be so up close and personal to something so incredibly special with Bill’s #1 fan and lovely wife, Joyce, sitting beside me.  Jens told me he hopes the show will be available as a “listen again” item for a very exciting future project he is working on – watch this space for further details.

Thank you Bill and thank you Martin for letting me share this singular experience with you.

Thank you Jens for hosting the show so eloquently in English and also for your kind hospitality.

***   – from the album, “Affairs Of The Heart” by Martin Praetorius