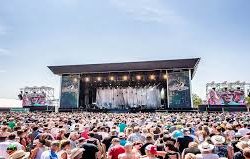 Take a large patch of blue, utterly cloudless sky, add lashings of glorious sunshine, blend with an abundance of primed, top quality bands and musicians, mix with thousands of enthusiastic music fans, scatter all of these ingredients onto a large, well-prepared, open space trimming the edges with a couple of open-air stages, giant tents, numerous amounts of bars staffed with a super-friendly army of volunteer helpers as well as a variety of international food stands and the result is: the perfect recipe for a summer music festival.

So, basically, if you can imagine all of the above, together with one of these “executive toys” that has the perpetual motion silver balls, then you’ve got a pretty good idea of what this year’s festival was like, especially if you were looking at it from an aerial position.

The BOSPOP programme is usually announced in December/January providing a welcome respite from cold, dark, winter days and from my point of view, I was really excited about the prospect of seeing several bands that have been on my personal bucket list for a while, namely: Steve Earle and the Dukes, John Hiatt, King King and – and at least to begin with – Bruce Hornsby. Some of the bands I have seen before but nevertheless, I very much welcomed the chance to re-run the fun with Simple Minds, Billy Idol, The Mavericks, Paul Carrack and last, but very definitely not least, the Greatest Bar Band In The World, Southside Johnny and the Asbury Jukes.

Saturday at BOSPOP is traditionally peppered with a family oriented rock/pop programme that included a band I hadn’t seen before but pretty much knew all their radio hits, namely: a-ha

Whattashow!  An absolute crowd favourite that had everyone dancing and singing along including the young girl who was standing beside me and who was wearing the coolest flashing-light trainers I have ever seen… she had a ball! The a-ha band line-up featured back-up singers/string section that looked like supermodels, Morten Harket looked and sounded amazing as did the other original band members as they presented a very well-choreographed set of their greatest hits.

Other Saturday highlights for me were John Hiatt, Steve Earle and the Dukes, Paul Carrack and of course, The Mavericks who closed the rock-tent stage with their rollicking, toe-tapping, dancing-the-night-away, latinesque paaarrrty sounds – as one would expect, of course.

The original Sunday schedule had Bruce Hornsby on the line up but for some reason, he cancelled and his slot was allocated to Scottish singer/songwriter, Colin MacLeod.  There’s nothing quite like announcing a Scottish musician and comparing him to Bruce Springsteen to get MY attention, that’s for sure… so much so, that I have put a special feature together on Colin which you will find here.

So yes, Sunday’s highlights for me began with King King whose almighty presence on the rock-tent stage kicked any late-night party cobwebs well into touch! I absolutely loved their set and it was just so great to see the other half of the Nimmo Brothers after having seen Stevie Nimmo open BOSPOP 2017.

I then moved over to the main stage watch Colin Macleod’s set just as he was sound-checking. 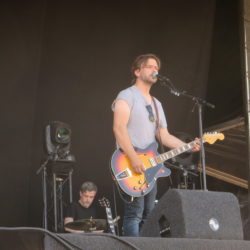 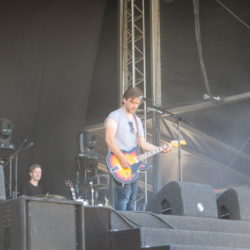 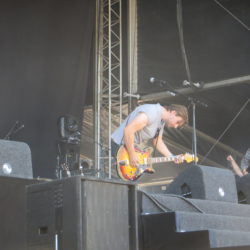 Colin’s set actually featured three quarters of the material from his brand, new and rather excellent CD release, Bloodlines.  Ably supported by his band, Colin MacLeod’s performance attracted a substantial and hugely enthusiastic crowd to the area in front of the main stage – my rule of thumb for measuring success at a concert these days is based on the number of smart phones recording “the moment” and I can categorically say that there were many such devices filling the airspace around me!

Bearing in mind that this particular weekend coincided with the final game of the 2018 World Cup, it made me smile when Colin introduced the band… in the same way that the Croatian Team mostly have surnames ending with an -ic, the Icelandic Team with a -sson, Colin’s bandmates were easily recognisable as having Scottish origins with their collection of Mac- surnames – unintentional, I know but nevertheless, apt as it happened.

Additional Sunday’s highlights were Billy Idol whose stage persona hasn’t changed a bit since I last saw him at BOSPOP in 2010 and of course, in keeping with BOSPOP there was a bit of serious musical history going on in the shape of Particle Kid and Lukas Nelson later in the afternoon.  However, as per the bright, grass green, Asbury Park football shirt that I was wearing, rock-tent headliners, Southside Johnny and the Asbury Jukes – introduced by BOSPOP founder, Peter Verkennis, was the band that I had been waiting to see and judging by the masses standing behind my pole position spot, I was very definitely not alone. 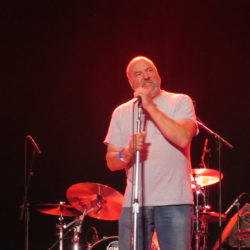 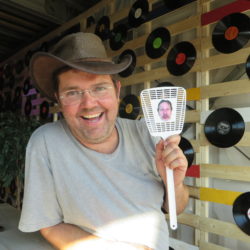 Straight in from a blistering appearance at Amsterdam’s renowned, Paradiso Club – aka the “Church of Rock and Roll” – where they performed the night before, Southside Johnny and the Asbury Jukes blasted us to another stratosphere with a set of non-stop hits that included: Better Days, Passion Street, Love On the Wrong Side of Town, Walk Away Renee, Harder Than It Looks, Talk To Me, The Fever featuring a stunning trumpet solo from veteran Juke, Chris Anderson, This Time It’s For Real and I Don’t Want To Go Home – says it all really as I don’t think anyone wanted this set to end. 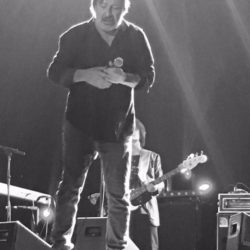 Southside Johnny – Talk To Me at Bospop

The band that hold the distinguished title of being, The Greatest Bar Band In The World went on to do a handful of European dates after their BOSPOP 2018 appearance before flying back to the Jersey Shore.  Marc Tyley from Manx Radio caught up with the band when they were in Osnabrück and interviewed Southside Johnny as part of a special feature he has been planning to mark the fact that he has been following the band since 1976… yep, that’s right… 42 years! The good news is that if you weren’t able to hear the broadcast, then this link will let you listen again, enjoy.

Incidentally, the rock-tent has grown somewhat this year and I believe it is actually wider than the main-stage so, that means – theoretically speaking dear Team BOSPOP – it would be possible to have a Jersey Shore triple-whammy of Southside Johnny and the Asbury Jukes, Little Steven and the Disciples of Soul plus Bruce Springsteen and the E Street Band altogether, on one stage… wow… is that a seriously mind-blowing prospect, or what..??

In closing, I’d like to say a special “hi” to all the wonderful people I met at this year’s BOSPOP including my lovely rock-buddy for the King King set, Esther as well as all the other “pole-positioners” at the Jukes’ set who were kind enough to share their thoughts about what makes this band so special for them.

Sincere thanks also to Team BOSPOP for putting yet another fantastic weekend of music together, it’s always a pleasure to be part of this festival and I am looking forward to re-running the summer fun all over again on the weekend of 4th – 5th July 2019.

In the meantime, it’s back to reality for me… at least until my next concert!